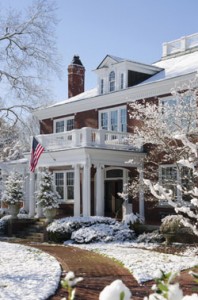 Warren Buffet famously stated, “Forecasts may tell you a great deal about the forecaster, but they tell you nothing about the future.”  With the new year in full swing, and volatility already making its effects felt, we would like to provide you not with a “forecast” of what the year will do, but rather a compilation of some key themes and issues we feel confident will have an impact on 2015.  The team at Ambassador will be watching these closely, in an effort to position our portfolios to maximize opportunities and reduce threats for you, our clients.

As you can see, it should be a very interesting 2015 (For more information on each of these themes, please continue, below).  As an optimistic historical aside, the three other times the country found itself in the seventh year of a Presidential term and in the middle of the decade, the S&P500 has logged double digit gains.  Conversely, bond guru Bill Gross said the following in his January 2015 outlook, “Be cautious and content with low positive returns in 2015.  The time for risk taking has passed.”  The team at Ambassador anticipates something in the middle, and we will stick to our long-term, strategic values in order to help ensure our diversified portfolios ready for the environment ahead.

Central Bank Divergence – The Federal Reserve is poised to raise short-term interest rates sometime in 2015, after ending their fourth round of bond buying known as “Quantitative Easing” (QE).  Meanwhile, both the European Central Bank (ECB) and Bank of Japan (BoJ) are moving toward more QE, with China also easing its monetary policy, all in the hopes of stimulating growth.  Lower overseas rates should increase demand for US bonds, keeping yields relatively low (even as the Federal Reserve raises rates).

Stronger US Dollar – As the ECB and BoJ continue to print their own currency in order to purchase bonds, the US dollar should correspondingly strengthen.  A stronger dollar helps foreign companies become more competitive with their exports, and allows for more purchasing power in the US on the goods we import.  It should keep downward pressure on both commodity prices and inflation here in the US.  However, if the dollar becomes too strong, it could spell earnings trouble for US multinational companies when converting sales from overseas into the dollar.

US Economy Leading the Pack – Whether you call it the “cleanest shirt in the dirty hamper” or the “nicest house on a bad block,” the US economy is in a better position than most other developed markets.  That’s not to say we don’t have issues of our own; chief amongst these, a labor participation rate that is too low and concerns over slower overseas growth.  That said, barring any critical missteps by the Federal Reserve, the US economy should remain on track.

Energy in Flux – The fall in the price of crude has been dramatic, to say the least, with nearly a 50% drop in a matter of months.  This drop has been viewed as a seemingly “friendly” benefit of excess supply by consumers, who have more money in their pockets with less going to pay for their commute.  At the same time, those covering the industry are asking, “With friends like this, who needs enemies?”  1986 was the last time the US faced such a dramatic plunge in crude oil prices.  A 67% drop, back then, left oil at just above $10 per barrel and many domestic producers out of business.   Since then, the OPEC nations have helped prices (and their profits) rise dramatically.  It is still too early to ascertain if this is another game of “chicken” spurred by Saudi Arabia, or if the price issues are more tied to increased US production coupled with less demand from economies in Europe and Asia.  In either event, it appears likely that oil prices will move lower in the near term.  Our belief (and hope) is that these pricing issues won’t last through the year, and these events should not derail the long-term movement towards American energy independence.

Even Higher Volatility – The start of 2015 brought with it a four-day losing streak on the S&P500, something that didn’t happen at all in 2014 (which was, by the way, the first time on record.)  Adding to the potential for a volatile year are the facts that the S&P500 hasn’t had a 10% pullback since the summer of 2011 and the VIX Index (also known as the volatility index or “fear gauge”) was well below its historical average for 2014.  With geopolitical uncertainty abounding and Central Bank Policy divergence at play, a more volatile market should be expected.

Market Update
Seeking and Speaking the Truth Read More
Market Update
Shaping the Overall Picture Read More
InsuranceRetirement
A conversation worth having. Read More
Let our professional financial advisors help you achieve the legacy you desire for yourself, loved ones, and organizations. Contact Us