Central Penn Business Journal recently ran a feature about faith-based financial planning. You can read the article below! 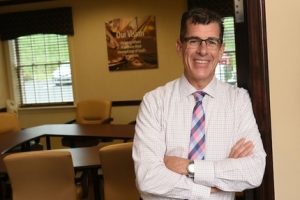 Bernie Bostwick is executive vice president of Ambassador Advisors, which provides financial services to faith-based institutions and their supporters.

Two guys walk into a conference room. They sit down, and one asks the other, “So what’s your bank statement look like these days? Also, tell me about your relationship with God.”

It sounds like the beginning of a cringe-worthy joke. But faith-based financial services form their businesses around those types of uncomfortable questions.

The number of people looking to integrate their personal values with their personal finance is climbing, even as statistics show more Americans distancing themselves from organized religion, according to several faith-based financial groups in the midstate.

Concentrated branding and marketing efforts, as well as favorable demographics and rising demand for other kinds of community-focused services, have helped fuel growth in an industry one might expect to see shrink in an increasingly secular world.

Only slightly more than half of Americans cited religion as “very important” to them in a 2016 Gallup poll. That same poll found that only about 55 percent of the population is a member of a church or synagogue — a number that has decreased steadily from a rate of 70 percent as recently as the late 1990s.

Those statistics might, to some, seem a bad omen for the future of faith-based financial services. But the numbers locally and nationally don’t support that conclusion.

“We’re OK to be in a little pond. But we’re becoming a bigger fish in a little pond,” said Bernie Bostwick, an executive vice president of Lancaster County-based Ambassador Advisors.

Ambassador has grown since the early 2000s from a roughly five-person firm into one that now has more than 25 employees and a presence throughout the Mid-Atlantic and New York. Although the company works with individuals and families, its bread and butter is providing long-term financial services — including developing planned giving programs — for faith-based nonprofits and churches and the people who support them.

That institution-centered work has helped Ambassador expand outside Lancaster to attract regional charities in places like Maryland, New Jersey and New York, as well as national clients like The Pocket Testament League, an organization that hands out pocket-sized versions of the Gospel of John.

Ambassador is also on the cusp of launching a new training course, dubbed Finding Significance, meant to teach church congregations about topics like investments, insurance and tax-efficient ways of leaving wealth to charities and loved ones.

The firm’s growth is not an anomaly.

The faithful have flocked in increasing numbers to like-minded firms across the country. Ronald Blue & Co., a Christian firm that is also one of the largest registered investment advisory firms in the country, reported a more than 16 percent increase in its number of clients over the past three years, the Wall Street Journal recently reported. Even the likes of Merrill Lynch and Morgan Stanley have created faith-based focus groups.

Part of the growing popularity lies in the very fact that would seem to spell the demise of faith-based organizations: Americans’ declining interest in organized religion.

When finances get tight, churches and nonprofits often realize they need a hand getting every penny’s worth out of every donated dollar, Bostwick said.

That need is especially pressing when congregations and supporters have older-skewing demographics. In Pennsylvania, one out of every five people identifying as Christian, for example, is over the age of 65, according to Pew Research Center.

That was an issue Bostwick and several of his colleagues realized as they served on boards of local ministries.

“What we were beginning to realize is they were losing some of the funding they had because a lot of their supporters were passing away,” Bostwick said. “A lot of (their donations) were being taxed, so their ministries that they loved and had a passion for weren’t getting the money; their families weren’t getting everything they really desired to get.”

Faith-based advisors like Ambassador saw a niche. Like many advisory firms, they were well-versed in the craft of protecting assets from Uncle Sam, and what better groups to do it for than ones who shared their religious values?

Church or synagogue attendance also might not be the best measure of how values-focused people are feeling nowadays.

Americans donated a record $373 billion to charities in 2015, according to Giving USA, a national research group. Investors are also pickier about the kinds of industries they support with their assets, specifically seeking out companies that support causes like environmental sustainability or gender equality. Professional money managers are sinking about 25 percent more money into these kinds of socially reponsible strategies now than they did three years ago, according to the Global Sustainable Investment Alliance.

As people look to invest their wealth responsibly, there is a good chance they will turn back to their faith for guidance, said Julie Hammerman, founder of JLens, a national Judaism-based investor network.

“It’s not a fringe movement anymore,” she said of values-based finance. “It’s very mainstream, and values oftentimes come from religion. That is going to fuel the growth of faith-based investing.”

When clients seek out faith-based financial advice, they often do so expecting the same types of services a traditional firm would offer: retirement preparation help, legacy planning, insurance options. But they want those conversations placed in a religious context.

“In many ways it’s not really the different services. It’s actually what our focus is,” Bostwick said of what sets faith-based organizations apart from the secular competition. “What we feel and we believe is that anything that is in someone’s possession, everything they have, is really not theirs but is owned by God.”

An Ambassador advisor, for example, might sit down with a couple getting ready to start a family. Maybe, Bostwick said, they want to organize their finances in such a way that one parent can stay home with the children.

“We talk through that and say, ‘If this is what God has placed on your heart, would you want that to change if your husband wasn’t in the picture or vice versa?’” Bostwick said.

Frank conversations about the intersection of faith and finance are where religious-based firms and organizations really leave their mark, Hammerman agreed. Whereas most advisors might intentionally steer clear of direct discussions about religion and values, faith-based groups start with those deeply personal topics and build strategies from there.

32 – Percentage of Americans’ charitable donations in 2015 that went to religious institutions, according to Giving USA. That number has shrunk most years for the past several decades.

53 – Percentage of Americans who cite religion as “very important” in their lives, according to a 2016 Gallup poll.

75 – Percentage of Americans in 2016 who believed religion was losing its influence on the lives of people in the U.S. That proportion is down about 1 percent from 2015, but 20 percent higher than 10 years ago.

26 – Percentage of professionally managed investments worldwide that are in “sustainable and responsible” investment strategies, according to the Global Sustainable Investment Alliance.

In some cases, that frame leads faith-based finance professionals to follow approaches that differ slightly from those of their non-religious peers. Investors in the JLens network, for example, help clients create measurable positive impact with their investments through action like supporting solutions to global challenges — i.e. investing in companies that support renewable energy — or shareholder advocacy. This focus ties into the Jewish teaching of tikkun olam, which roughly means “repair the world,” Hammerman said.

Many secular organizations also tout their community-mindedness and ability to work with clients’ personal goals as major selling points for their services. The difference is, in many cases, a matter of how those conversations are packaged.

Those challenges are top of mind for Everence, a ministry of Mennonite Church USA. The Everence umbrella includes a credit union as well as services like asset management, insurance and retirement planning.

The Indiana-based group rebranded in 2010, combining what were then two separate arms — Mennonite Financial Federal Credit Union and Mennonite Mutual Aid — into a single entity that dropped the word “Mennonite” from its name.

The change has helped broaden the pool from which Everence draws members, said Kate Lopez, marketing and communications manager for the group’s Lancaster market.

Nonetheless, faith remains a major component of the brand. Everence’s website lists more than two dozen denominations, mostly anabaptists or religions with anabaptist roots, that it serves. Although members no longer have to belong to specific congregations to join, they do have to agree to a statement of shared Christian values that spells out biblical beliefs about managing money.

“I just think people are looking for tangible ways to impact their communities,” Lopez said. “If they don’t connect necessarily with the faith-based component, they connect with us on the values.”

Those values center heavily around members’ individual needs but tend to come back to issues like charitable giving and responsible financial planning. Everence, in fact, offers a bevy of programs through its various branches: insurance, asset management, financial coaching, banking, scholarships and even Sunday school and church sermons about responsible money management.

Getting the word out about all those products, and shifting public perception away from the idea that Everence only does banking, or only offers insurance, is one of the biggest mountains the group is trying to climb right now, Lopez said.

The other mountain: staying up-to-date with technology. Everence is in the process of revamping its website, even as it strives to brand itself as a place where face-to-face interactions are the crown jewel of the organization.

Being perceived as uncaring or solely numbers-driven would be bad for any business. Services that base their brands on religion also sometimes encounter the opposite problem: people who are skeptical about a firm’s ability to deliver financially.

“A lot of people, rightly so, will question you when you’re in a faith-based community. A lot of people have been taken advantage of,” Bostwick said.

Developing that trust takes time and expertise. Ambassador’s advisors hold the same degrees and certifications as professionals at traditional organizations. Ambassador also has time on its side: the firm has been around long enough that clients know it and recommend it to others.

Bostwick feels good about the future of both Ambassador and the faith-based finance movement. Of course, he can’t help but also look up when looking for places to lay credit for his organization’s growth.

“It’s all because of what God’s doing through our firm, which is great,” he said.

Any opinions expressed in this forum are not the opinions or views of American Portfolios Financial Services, Inc. (APFS). They have not been reviewed by either firm for completeness or accuracy. These opinions are subject to change at any time without notice. Any comments or postings are provided for informational purposes only and do not constitute an offer or a recommendation to buy or sell securities or other financial instruments. Readers should conduct their own review and exercise judgment prior to investing. Investments are not guaranteed, involve risk and may result in a loss of principal. Past performance does not guarantee future results. Investments are not suitable for all types of investors.

Check the background of this Investment Professional
https://brokercheck.finra.org/